Traps and Secret Doors in the OSR

WARNING: THIS POST IS LONG!
Door art by Patrick E. Pullen
Thanks to Jonathan Pickens on the OSGR Facebook page, I am writing this post. He postulated: "What purpose do traps and secret doors serve in today's games? I mean, players have so come to expect these and have devised well-known methods to counteract them (10 ft.-poles, iron spikes, etc.), much of the tension now boils down to rolls of the dice rather than player intelligence and agency."

Let's talk about TRAPS first. I decided to take a look at 1E AD&D for the discussion, as it is the most familiar system to most players in the OSR. In order to find traps with "rolls of the dice" a thief is needed in the party. They have a base 20% chance at first level (and 99% at 17th.) But, let's dig into the text and see exactly what this means. 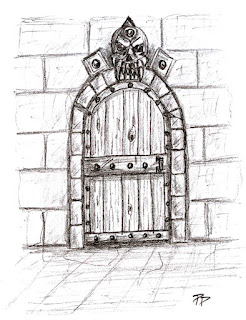 PHB pg 27: "Finding/removing traps pertains to relatively small mechanical devices such as poisoned needles, spring blades, and the like. Finding is accomplished by inspection, and they are nullified by mechanical removal or being rendered harmless."
PHB pg 28: " Finding/Removing Traps is accomplished in exactly the same manor as opening locks. Roll for each function separately (a trap must be located before removal can be attempted). One try per thief is allowed. Success deactivates the trap.
PHB pg 45:
Find Traps (Divination)
Level: 2
Range: 3"
Duration: 3 turns
Area of Effect: 1" path
Explanation/Description: When a cleric casts a find traps spell, all traps - concealed normally or magically - of magical or mechanical nature become visible to him or her. Note that this spell is directional, and the caster must face the desired direction to determine if a trap is laid in that particular direction.

DMG pg 19: "Use the time requirements for opening locks. Time counts for each function. Small or large traps can be found, but not magical or magically hidden traps."
Here's where things get interesting. Gary is verbose here, so read it thoroughly, and carefully.
DMG pg 97: "Detection of Unusual Circumstances, Traps, And Hearing Noise: Regardless of the means, it takes effort and concentration to perform any of these activities . . . [examples] . . .To sum it all up, DON'T GIVE PLAYERS A FREE LUNCH! Tell them what they "see", allow them to draw their own conclusions and initiate whatever actions they desire. You are the source of their input, a time keeper, and the motivator of all not connected with them. . .

Assume that your players are continually wasting time (thus making the so-called adventure drag out into a boring session of dice rolling and delay) if they are checking endlessly for traps and listening at every door. If this persists despite the obvious displeasure you express, the requirements that helmets be doffed and mail coifs removed to listen at a door, and then be carefully replaced, the warnings about ear seekers, and frequent checking for wandering monsters (q.v.), then you will have to take more direct part in things. Mocking their over-cautious behavior as near cowardice, rolling huge handfuls of dice and then telling them the results are negative, and statements to the effect that: "You detect nothing, and nothing has detected YOU so far --", might suffice. If the problem should continue, then rooms full with silent monsters will turn the tide, but that is the stuff of later adventures."

Wow. That's actually a lot of information to disseminate. Let's go through, page by page.
Pg 27-28 PHB is the basic rundown of the thief's ability. But, it also severely limits the thief's abilities. The ability is to find relatively small traps. A thief walking down a corridor, by strict interpretation of the rules, cannot find a pit trap or collapsing ceiling. Also note, there are other limitations that don't show up in the PHB. Gary liked to never give the players all of the information.
On page 45 of the PHB, Gary actually gives clerics a much stronger ability than the thief. But, it is severely more limited in time, and therefore scope. To understand how limited it is, we have to look at the times that everything takes in D&D. A turn is 10 rounds, or 10 minutes. And he expects that adventurers rest 1 turn out of every 6 (10 minutes per hour). Moving and mapping a 90' section of corridor takes 1 full turn. So, 270' of corridor can be checked for traps with this spell. Less if a room is being searched. But, it does notice every trap.
The DMG is where all of this starts to matter, though. In the DMG on pg 19, it is revealed that magical traps cannot be found by thieves (no matter their percentages.)  On the same page, we find that most locks take 1-4 rounds, with some taking up to 10 rounds to pick. So, finding a trap takes the same amount of time. So does disarming a trap. On DMG pg 38 "(melees or other actions which result in fractional turns should be rounded up to make complete turns.)" So, finding a trap takes one turn, so does disarming a trap. That's 2/3 of a wandering monster check. Even if you allow players to check for traps in a 10' corridor, that's a wandering monster check every 30' without finding a trap.
But, pg 97 of the DMG is what drives everything home. Most doors and corridors are not going to be trapped. It is the DM's job to give descriptive clues of when to check for traps. The description is what makes the game. Without it, there is just endless rolling to see if a trap can be found. It is necessary to push the players away from rolling dice to find traps, and move them to a descriptive cue to search.

Now, Secret Doors are a similar, but different monster.
PHB 16: "Secret or concealed doors are difficult to hide from elves. Merely passing within 10' of the latter makes an elven character 16 2/3% (1 in 6) likely to notice it. If actively searching for such doors, elven characters are 33 1/3% (2 in 6) likely to find a secret door and 50% likely (3 in 6) to discover a concealed portal.
DMG 97 (see the paragraphs on traps above): Secret Doors: These are portals which are made to appear to be a normal part of the surface they are in. They con possibly be sensed or detected by characters who are actively concentrating on such activity, or their possible location may be discovered by tapping (though the hollow place could be another passage or room beyond which has no portal in the hollow-sounding surface). Discovery does not mean that access to the door mechanism has been discovered, however. Checking requires a very thorough examination of the possible secret door area. You may use either of two methods to allow discovery of the mechanism which operates the portal:
1. You may designate probability by a linear curve, typically with a d6. Thus, a secret door is discovered 1 in 6 by any non-elf, 2 in 6 by elven or half-elven characters, each character being allowed to roll each turn in checking a 10' X 10' area. This also allows you to have some secret
doors more difficult to discover, the linear curve being a d8 or d10.
2. You may have the discovery of the existence of the secret door enable player characters to attempt to operate it by actual manipulation, i.e. the players concerned give instructions as to how they will have their characters attempt to make it function: "Turn the wall sconce.", "Slide it left.", "Press the small protrusion, and see if it pivots.", "Pull the chain." It is quite acceptable to have a mixture of methods of discovering the operation of secret door.
DMG 136: Wand of Secret Door and Trap location: This wand has an effective radius of 1" for secret door location, 3" for trap location. When the wand is energized it will pulse and point to whichever thing it is to locate if a secret door/trap is within location range. Note that it locates either one or the other, not both during one operation. It requires 1 round to function and draws 1 charge. The wand may be recharged.

There's a lot less information about secret (and concealed) doors. But, let's go step-by-step. PHB 16 states that passive detection of a secret door by an elf DOES NOT HAPPEN. It only happens with concealed doors (i.e. the latter from the previous sentence). Even actively searching, elves only have a 2 in 6 of finding secret doors.
DMG 97 goes even further away from the auto-successes from dice rolls. The rule moves the doors down the "dice ladder" if the DM feels it is warranted. It also blatantly states that false positives should be given for secret doors (. . . has no portal in the hollow-sounding surface.)
The other important part of this passage is time (again). Each turn (10 minutes) allows for one character to search one 10' x 10' section. To search a 30' square room would take a party of four 3 turns (the time it takes to check for wandering monsters). To have each member check each wall would take 14 turns (remember, every 6th turn is a rest). That's four wandering monster checks, and a 5th one not very far away.
Finally, there is the Wand. It detects secret doors within 10' of the user, and traps within 30' of the user. It only works in one direction, and takes a full round to use. Although it can be helpful, it is only a stopgap, or possibly a "I'm sure. Let's use the wand to be 100%."

Summary, for those of you who don't want to read all of that ^^^
The long and the short of this all goes back to time and wandering monsters. AD&D had slow movement, a difficult rest period, and two wandering monster checks per hour. If PCs intend to search every nook and cranny meticulously, they are going to pay with blood from the wandering monsters.
Instead, it is vital that the DM give vibrant descriptions of the surroundings, so that players can make informed decisions when to search, and when to move. They will always be prodding with their 10' poles, but I assume that's in the time frames given by Gary above. Thieves don't get to roll for large traps anyway, so it makes sense for the PCs to use other methods to mitigate the dangers in a hum-drum hallway.
Use adjectives. Teach the players to think, not just roll dice. And your game and their play will be well rewarded for it.

Swords & Wizardry follows all of the rules above, except elves can passively find secret doors. However, the rules don't state anything for concealed doors. So, just change those sideways S to hidden doors with curtains, rugs, furniture, stucco or paintings. They will catch on that their dice rolling isn't working. Or they won't. Either way, the game will be more fun.
Jayson "Rocky" Gardner at 12:24 AM
Share